Parenthood often feels like a secret club. Not the good kind of secret club with complicated handshakes and easier admission into Ivy League schools; the kind of secret club with a membership clause which states “do not tell non-parents about what goes on here, or else the population of planet Earth will shrink and then be no more.” I mean, I guess there are complicated handshakes, but only because one hand is probably covered in human excrement and the other hand is trying to keep the stroller in constant motion so the baby doesn’t wake up. So yeah, handshakes are difficult.

This is not to say that I don’t love being a parent. Just read any of my other sappy posts about my kids. Like this one, this one, or this one.

I like to get advice before I start just about anything. I don’t like rules, but I collect advice in mental binders lined up and catalogued deep in my brain. It is odd to me when people don’t want advice – you don’t have to use it, but wouldn’t you like to hear it? Maybe it will be useful later, you know? It’s like women who don’t want to take a birth class before they have a baby. Really? You’re just gonna wing it? Instead of skimming from the experience of all women since time began as well as the medical advice of practiced and wise doctors? Another HUMAN is coming out of your BODY. To me, this necessitates at least a few tips or tricks.

So before I started potty training, I gathered wisdom from many sources. My mom and Sam’s mom (who, between the two of them, have potty trained 12 children. I mean.) I asked my sisters, my friends, cousins, and even the world wide web. And I started to notice a trend.

Everyone hates potty training. And I mean EVERYONE. Everything I read, everyone I talked to, they all basically said the same thing:
It’s going to suck. It will not be fun. And she might not be ready.

My cousin Yael sent me a potty-training manual which claimed unfettered success in as little as 3 days. 3 days? Sign me up, man! I decided to leave the haters behind, to put my head and heart full into the process, and prove the world wrong.
Potty training would be fun. And it would be easy. And I would be its master.

Clara is 20 months old, which some say is too young to take out of diapers. In fact, this 3-day method I used says that no child is ready to be fully toilet trained until they are at least 22 months old. And by fully trained I mean no accidents when the 3 days are up. None. But I had a few reasons to start now:
1. I’m tired of buying diapers for two kids.
2. I know kids who were trained way earlier than this.
3. Clara gets a diaper rash every single day. Every. Single. Day. I don’t mean some innocuous rash, either. I mean a painful awful rash that makes me grimace every time I see it and makes her cry in pain whenever I have to change her. I have done everything in the world to make it stop. Tried every diaper brand in the world. Used every medical and non-medical cream (and if one more person tries to tell me that mother f-ing coconut oil is going to solve it, I will flip). The only way we’ve been able to keep it at bay is by using cloth wipes and absolutely pasting her with Desitin every time we change her. She still gets a rash every day, but it doesn’t get as bad, and it usually clears up pretty quick. So this is my main motivation to get her out of diapers: I just feel bad for the poor girl.

Keeping these reasons in the forefront of my mind, I prepared to kick ass at potty training. I made meals and healthy snacks ahead of time so I wouldn’t have to be busy in the kitchen. I bought cute tiny undies. I put away any textiles or toys that I cared about and laid comforters over my living room rug. I was ready. I was excited.

The first time Clara peed on the floor, her eyes widened in shock as a puddle formed beneath her. She froze and whispered, “Hot, Mama. Hot.” I rushed her into the bathroom and explained again about where we go potty. I changed her undies, gave her a big hug, and told her she was doing great.

The 7th time Clara peed on the floor, I knew it was going to be a long first day. She’d been wearing a diaper her entire life, living in a dreamy freedom of release with no consequences, all day and night. Now I was asking her to learn when that release was coming, run into another room, drop her pants and do it on a hard plastic seat. I mean, I get it. That’s a lot to learn.

By the third day of my little plan, I was desperate but determined. For every success there is a very large amount of failure. Seriously considering quitting the whole endeavor, I sent two desperate SOS signals via e-mail. I keep a short list of smart and normal moms on hand for when I have no idea what to do with my kids. I’d highly recommend the practice. Both of my wise friends told me to keep going, and poured out some much needed encouragement. I decide to push on.

Morning of Day 4: I am exhausted. Clara is exhausted. Sam is sick of doing laundry. Smooch probably has six pounds of chewed up gum piled in the pit of her stomach because that is the only currency she’ll accept in this twisted black market of pee and poop. I am willing to make her a peppermint Trident millionaire if she will just GO IN THE TOILET. She has one great moment where she tells me she has to go and actually makes it in time, despite being 3 blocks from home in our stroller. In other news, I can sprint when necessary.

Night of Day 4: Sam and I go on a much-needed date. I haven’t left the house since we started training (as dictated by the 3 day method). We take the baby but leave Clara with two capable 7th graders, a couple of girls we love and trust. Also the only people who don’t know how bad potty training blows. They promise they’ll get her to go potty. AND THEY DO. TWICE. With no accidents. We cautiously rejoice.

Morning of Day 5: Clara makes it all the way through church with dry undies. Amazing. It’s been almost 24 hours since she had an accident. I swell with pride, pulling a muscle in my shoulder as I hardily pat myself on the back.

Afternoon of Day 5: Everything goes to hell. Clara is in open rebellion to our efforts. She pees in the kitchen. She pees in her bedroom. She pees in her high chair. We shut ourselves in the bathroom with her and make a silent agreement that she is not leaving until she goes on the potty. She catches on to our plotting and pounds on the door, telling us it’s “stuck.” We try to distract her with jokes and songs. We  plead. We get serious. She takes an obvious “I have to pee” stance, dancing around with a pained look on her face. I sit her on the potty. She cries and gets off. I put her back on the potty. She yells, kicks, stiffens her entire body, and gets off again. The blue in her eyes turns to ice as she slams shut the plastic lid of her little potty chair, then slowly places one foot on top of it in a Captain Morgan pose. She crosses her arms and pees all over the bathroom floor in absolute silence. We have become hostages in a four foot by three foot laminate jail cell, and our jailer is daring us to do something about it.

Later that afternoon of Day 5: Clara wets her bed during nap time. She has never peed in her bed during this entire process, and we know she’s upping the ante. We change her bedding, give her a kiss, and put her back in her crib.

10 minutes later on the afternoon of Day 5: She wets her bed again. With what bodily fluid I do not know because how can someone this small have so much to release? Is she some kind of witch doctor, conjuring up urine at a moment’s notice? We change her bedding again, put her back to bed, and collapse in stunned silence on our couch.

Sam closes his eyes. “I think I’m starting to hate my daughter.”

I crack my neck. “I’m imagining slapping her. And it feels good.”

Sam laughs. “Well that’s funny because I was just imagining giving her a swirly in the toilet.”

I sit up with a groan. “I think- and call me crazy- but I THINK the fact that we are sitting here fantasizing about slapping our daughter might mean it’s time to call it. Let’s put her in a diaper and take a break. Do you think so? Should we?” 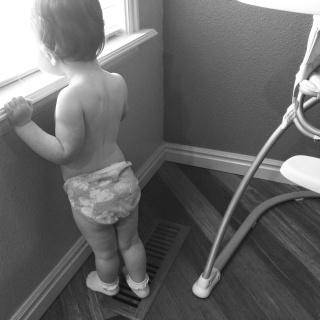 Clara has been back in diapers for two days now and peace is once again restored in our home. Along with her rash. And a $40 diaper purchase at Target. I’m not sure how long of a break I’ll take. Maybe I’ll try again tomorrow. Maybe I’ll let her kindergarten teacher give it a shot. Either way, the gum is put away for now and I haven’t mopped up a puddle in over 48 hours, so things are definitely looking up. As I write all of this down, I realize that she really was starting to understand what to do. But she was also absolutely terrified of the toilet. She would NOT sit on it without crying and screaming, and I’m just not willing to engage in that kind of a power struggle with an irrational toddler who can barely speak English. So…

Sincerely,
the worst potty trainer ever (off to pour myself a well-deserved drink),

6 thoughts on “when you become the diaper.”