A few weeks ago the worship pastor at our church asked me to write something and perform it for the first week of Advent. Advent is four weeks of preparation for celebrating the birth of Jesus (or why we celebrate Christmas) and each week has a different theme. The first week is Love. So that was my assignment: Write something about love, and then tell it to the church.
That’s all she gave me to work with. One word. Love. “I trust you!” she said, and then left me to my wonderings.

As I prayed and started drafting together words and sentences, the only two thoughts that kept coming to mind were “Uncomfortable” and “Inconvenient.” Weird, right? I needed to write about love, and not just any love but Christmas Love which is my favorite kind of love, and the words God kept whispering to me were “uncomfortable” and “inconvenient.”

I was confused. Those ideas were not where I wanted to start my piece. I wanted to tell everyone some warming thoughts about, I don’t know, spreading Christmas joy and loving your neighbor as yourself. I wanted to use annoying words like “magic” and “glow” and “holiday cheer.” I am the worst of the worst when it comes to Christmas, playing my holiday Pandora stations starting in October, working sugar cookies into my food group pyramid, and rolling out traditions with gusto. I know some people (like my husband, God help him) aren’t fans of the hassle and expectations of the holiday, and I know some people don’t even think it IS a real Christian holiday, but for me? These cold and quiet days in December lead me straight to the manger, kneeling before the crazy and inconceivable beginnings of the life that my entire faith is based around: Jesus born unto us! Incredible!
See, now I’ve begun my Christmas babbling and this is exactly what I imagined writing about- this is the kind of stuff I want to say about Christmas Love.

But instead?
“Uncomfortable,” He whispered.
“Inconvenient.”

I prayed for insight. I wrote lengthy, meandering first drafts. I gave up, began again, and gave up once more.Then in the midst of all this thought wrestling and word wrangling, Thanksgiving came.

A Thanksgiving week came, a week that has since been named, “The Cursed Thanksgiving.” Because it was a week from the pits of hell.

I should have known something was up when I made sugar cookies the Sunday before Thanksgiving (so simple, so second nature to my cookie loving ways) and had to throw away the whole double batch of dough… because I forgot half the butter.

Thus it began.
The Cursed Thanksgiving.

Thanksgiving morning, Sam’s brother didn’t feel very well. He had arrived at our house from Washington the night before, along with his wife and their little boy, and Sam’s parents. He felt progressively worse throughout the day, and didn’t even make it to dinner at my sister’s house. He laid on our couch in pale and clammy silence until he finally started throwing up while we were all away at dinner. There was no real way to avoid him, since there were 6 adults and 3 small children staying in our tiny house for the whole weekend, and every corner was full of people or stuff. Which isn’t ideal, but I come from a family of seven kids so I’m no stranger to the inevitability of shared illness, and share we did.

By the end of this flu rampage two weeks later, the virus had gone through 12 people in my immediate family- including my husband and both of my children (and then eventually me). Have you ever seen a baby throw up? It’s so, so sad. Not only do they feel terrible, but the surprise of vomit coming out of their little body is all over their faces as they twist and cry and try to avoid the sensation that is coming up their throats. And they are not attuned enough to their bodies to throw up anywhere except directly in front of them, which, more often than not, was on the person holding them while they cried.

I had been praying all week for God to reveal something new to me about love, praying for some insight as I wrote. I asked for clarity about real love.

NEVER PRAY FOR ANYTHING YOU DO NOT WANT TO HAPPEN.

Because nothing teaches a lesson about “uncomfortable love” like someone else’s warm vomit sliding down your neck and into your shirt.

It wasn’t just the throw up, either, that this week of curses launched our way. Nothing went right. I burned/ruined almost everything I was in charge of for our dinner, despite the fact that I orchestrated and cooked most of our perfectly executed Thanksgiving in Arizona the week before. Had I ruined all my holiday mojo by trying for a repeat championship? Even as I was packing up my (ruined and replaced by store-bought) food to drive to my sister’s house, I knocked a glass of juice off my counter. This may seem insignificant, but I was already running late and now sticky juice and shards of glass were scattered all over the kitchen floor. It was like a punch in the throat reminder that I could do nothing right. 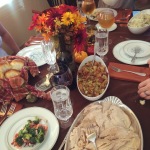 ^^Pictures from our visit to Arizona, good Thanksgiving and pre hair fiasco.^^

The week just got worse and worse, my house a den of illness, my children sick and cranky, the family tense with each other and each other’s germs. And no one was even hungry for all of the food and leftovers, due to the constant splatter of vomit stealing our appetites. This whole shit-show (quite literally in terms of the eventual progression of the cursed stomach virus) culminated, in my vain opinion, in the most tragic of incidents:

when I got the ugliest hair cut of my entire life. In a rash decision to get my hair trimmed by a stranger at a new salon because I was already there with my family, I let some 19-year-old girl accidentally make me look like the annoying best friend in every 80’s movie ever made. Or maybe I look like Cathy, that sad cartoon character who loves chocolate. My hair is shaped like a rectangle and I look like I’m wearing a poorly made wig-  I mean, I would look like that, if I ever let my hair down. Which I most certainly have not, in almost a month now. My vanity! Shot to pieces! Hair buns every single day, it’s the only way I handle leaving my house.

Through all of this madness, through the whole week of annoying and disappointing circumstances, something was firming up in my heart. An acorn of understanding, my hands cupping around some small and distinct idea about love. As I washed load after load after load of sheets and laundry from my children and my husband’s flu, as I watched my little sister host a beautiful Thanksgiving dinner, all the while hustling around her three small children with another growing safe in her belly, as my home pulsed with the angst of too many people with too many feelings and too many germs, as my sister-in-law missed out on Thanksgiving to take care of her sick husband, as my mother in law and father in law took it all in stride with the calm of two people who raised five children together,

as all of this swirled around me,

love was revising itself.

In the middle of the week, as Wednesday afternoon slid into evening, I watched a baby be born into the world. I wasn’t even supposed to be there. My older sister Rebecca was out-of-town for this special birth that she had planned to attend, and now she couldn’t make it. She was devastated. The girl giving birth asked me and my little sister to come instead (it takes two of us to replace Becca), so we dropped all of our Thanksgiving preparations and hurried to the labor and delivery floor of the hospital downtown. The couple welcoming a new son weren’t much older than kids themselves, the mother not even done with high school yet.  We watched these two teenagers bent towards each other, one in the dire and insistent pain of childbirth, the other with tears on his face as the mother of his baby cried out with shock. Neither of them had planned for this; the baby or the pain, but here they were, 9 months and one failed epidural later, birthing a son on Thanksgiving eve. She cried, she pushed, she said she could not go on… and then a dark-haired son was born. They bent towards their child, their faces lit with awe and fear, their eyes brimming with tears, the maps of their young lives suddenly redrawn with this engulfing new love.

And there was Christmas. Right in front of me.

It was everywhere. It was in the constant laundry. It was in the three baths a day I was giving my sick babies. It was in full guest rooms and missed dinners and ruined plans. It was service and kindness and care for each other in our worst states.
It was humbling.
It was inconvenient, unaware and dismissive of our holiday expectations.
It was gritty, hard, and compulsory.
It wasn’t pretty, this grand and strange love being revealed to me.

Revealed in the painful and surprising birth of a family that I witnessed in that hushed hospital room. Revealed in the dark of night as I held my whimpering daughter, feverishly clinging to me in her sleep. Revealed in the patience of my dear family. It was Christ in us and through us, Christ here, Christ come to show us what real love looks like, starting in the humble manger of a humble stable.

It was Christmas anew.

And it was, actually,

Here’s the piece that I finally squeezed out of my fingertips and shared on a Sunday morning, if you want to watch it. It’s the first few minutes of this video. And here are the words that came.