For months and months, Clara has insisted on saying our prayer before we eat dinner. Every night it’s the same rushed breath of thanks,

She folds her little hands and bows her little head, squeezes her ocean-tide eyes shut in a squint and her two year old liturgy tumbles out in a hurry. Sam and I barely have time to close our eyes before she finishes. And though sometimes we’ll follow up with our own prayer, we grin about the swift manner of hers every night, smiling across the table at each other as we pick up forks and napkins and start our meal together.

For awhile, Clara didn’t want to pray until her baby brother assumed the posture she deemed necessary; that is, bowing his head and closing his eyes, and folding his pudgy hands on his tray. He never obeyed her requests for stillness, of course, and she would sigh in exasperation at his incompetence, then proceed with her nightly thanks-giving ritual. This first born girl of ours loves a good ritual, and she especially loves a sense of order.

For most of this winter, I’ve been worried about a stutter that Clara developed sometime in December. She started losing the start of sentences- it wasn’t the kind of stutter where a syllable is repeated, it was the kind where a syllable is held. So she would have a thought and get stuck on the first word of her sentence, or maybe just the first letter. Instead of a quick two-syllable “Mama,” her lips would press together in a long and forceful “Mmmmmmm,” unable to move through the rest of the word.

The stutter came out of nowhere, like a wall of flood water, rushing over her speech and drowning her voice. She’s always been verbose, babbling coherently since four months old, but hearing this stutter take over stole my confidence in her communication. I had to hide tears as I watched her try to speak, her eyes rolled back in concentration, her entire body tense, fists at her side, perched in frustration up on her tip toes; if I could have spoken for her, I would have. She had something to tell me and she couldn’t. She had a need and didn’t have the words to ask. She wanted to talk with me and instead found herself wading through the thick mud between her thoughts and her tongue. It was the first time I’ve had to wonder if there was something wrong with her, and I spent many nights laying awake thinking about it, sick with concern.

After a few months of no improvement, and seeing the exhaustion on my little girl’s face when other adults or children couldn’t understand her, I reached out to my friend Danielle, who is a speech pathologist. I wrote with Clara’s symptoms, her ticks and struggles, and wept as I typed. There was nothing physically ill about her, and her health didn’t seem to be in danger; it was the emotional toll of her speech difficulties that was killing me. I watched again and again as she gave up, starting sentences and then quitting, frustration radiating from her body. It broke my heart to see her in that kind of darkness, her world cloaked in jittery misunderstanding. 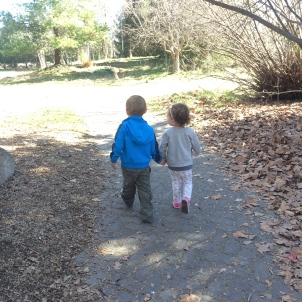 I didn’t have to wait long for a reply. Danielle wrote back the next day with advice, and with a blessed ray of sunshine: don’t worry, she said. Don’t worry! Stutters are very normal for kids her age. They almost always start at 2 1/2 (which was almost her exact age) and wouldn’t be considered a problem until she turns 5.

Between Danielle’s advice and some research, I counted the things we needed to avoid:
-Finishing thoughts or words for her (did that constantly, whoops).
-Telling her to slow down or take a deep breath (did that every day, shoot).

And a few things that would help:
-Sam and I speaking s-l-o-w-l-y and clearly, modeling a relaxed speaking style.
-When we saw her getting irritated with herself, gently remind her that we were listening and that we weren’t in any hurry.
-React to her message, not the delivery. Basically, pretend there was no stutter. Just respond to what she said, no matter how long it took.

It’s March now, spring unfolding on sunny patios, floating on afternoon breezes, stretching into trees heavy with blossoms. It’s spring and it was 75 degrees outside today, so I took my kids to the park. Truth be told, I’ve taken my kids a lot of places this week. More places than usual. I tend to be a “one outing a day” kind of a mom, if that, but this week I blew off our normal pacing and we went. Despite the fact that my kids have spring colds. Despite the fact that they’ve missed a few important naps. Despite the fact that sometimes they just didn’t want to go. They wanted to stay. But the sun keeps getting warmer and I have that energy I get at the rise of new seasons, so we didn’t stay much at all. And today my house of cards came tumbling down, joker sides up all the way around.

Neither of my babies slept last night. Their coughs choked them awake every hour, their bodies restless without the anchor of decent naps all week. This means, of course, that I didn’t sleep either. But I plan a park and playground meet-up for a bunch of my friends every Friday, and I didn’t want to miss today. So I gathered up my coughing, weary kids and wished for the morning sunshine to clear our heads. Clara was a mess. She cried all day. She didn’t nap again, too tired to find sleep. Wilted by the sun and my somewhat reckless scheduling, she fought me all day. Her attitude was impossible to deal with, not only because I felt responsible for her exhaustion but also because she’s not usually so volatile. So we fought, and I was tired, and she was tired, and Sam is on call so it’s been a lot of parenting alone this week, and Sammy ate an old sticker off the trashcan at the park, and yes. It was a long day.

We finally sat down for dinner, happy that Sam was home with us and that bedtime was finally in sight. Our dinner, a lackluster collection of leftovers and cut up fruit, wasn’t exactly inspiring. But at least we were eating together. We bowed our heads to pray, Clara taking the helm as usual, and I snapped my head up in surprise as she began.

She pinched a green pea in her fingers and popped it in her mouth, oblivious to my tears and Sam’s shock. It was the first spontaneous prayer she’s ever shared at dinner. It was the first time I’ve ever heard her thanking God for me. And it was a moment, for me, of two points in time touching in delicate completion.

Her stutter has vastly improved over the last few weeks, and her language has taken on a new sophistication as her speech corrected, marked with a new sense of memory and time stamps, correct sentence structure and polished thoughts. It’s a noticeable difference to everyone who knows her, but especially to me, and tonight was a tender reminder of how far she’s come.

It was just like Danielle told us: She was stuttering because her mouth was working to catch up to her rapidly forming 2 year old brain.

And it was just like we pray for our children every single day: That we would raise them to be observant, kind, and thankful people.

She is both. She is sharp like flint, soft like moss. She’s our baby but so, so quickly becoming a little girl. She fights us and she whines when we say no. She rushes to her brother when he wakes up each morning, eager to reconnect and kiss his soft cheeks. I love her so- I love her so. I love the synapses firing in her head, I love the bruises on her shins, I love the curls on her head, I love the blue and the green in her eyes, I love when she laughs and I love when she teases, I love all the ways we are different and all the ways we will one day be the same.

My God, what a gift. What a gift, this and every part of motherhood. This and every day with her and with him. The babies sleeping as I write. The children I longed for. The ones we get to call ours.