After I got married, my husband Sam convinced me to live in Nampa, Idaho, his college town, a town so far outside my future casting I would’ve laughed in disbelief if you’d told me I’d spend ten years there. I grew up two cities east of Nampa, only 30 minutes away, but we rarely drove out there as kids, past the acres of mint and corn and rolling fields of sagebrush until we crossed the county line and entered what seemed like a whole other world. But then I married Sam and he bought our first home in the only place he’d ever lived since college, and here I am, ten years later, emptying cupboards and finally moving away.

I never liked Nampa. I didn’t try very hard, but childhood prejudices run deep, and the embarrassment of moving outside the “real” city nipped like a dog at my heel. Buying a different house 20 minutes away wasn’t a huge change, but it was enough to silence the angst. Hell, even the angst embarrassed me, because I think not liking where you live shows a discontent spirit. Isn’t it a kind of immaturity to complain about where you live? Just choose to settle in, and if you really need to leave, then go.

But here’s the thing: I’m sad to leave.

I am. I cannot believe I’m writing that, but somewhere between the cheese factory and the smells and the lack of bookstores, I found home here. I’m leaving with a clutch in my chest because leaving means more than I thought it would; it means stepping off the tiny stage of our life here, away from dear neighbors who handed out popsicles and cried on my couch, away from best friends a minute down the road, away from the circle of errands I ran each week (Winco-Costco-Library-Bank-Coffee Shop-Car Wash-Local Mailing Post-and let’s be honest-Target) and now I have to find a new way around a new town and a new gas station and a new mail place, which all sounds easy when I type it out but it’s the actual doing of the thing that’s awful.

I’m also afraid to go because I know what happens when people leave. I have 6 siblings and they all left, even me, and I’ve never forgiven any of us for growing up.

I was never close to my oldest brother. We barely knew each other as kids. He’s eight years older than I am, so he left for college when I was in 5th grade. Still, you know what I did when he left for a university in Ohio? I sobbed. I climbed in his bed with his blanket that smelled like his grown-up cologne, pulled it up to my chin and cried so hard that I fell asleep. I would miss him, yes, but mostly: I knew something was over. Even as a 10 year old, I knew that an era of my family, a particular chapter of our story, was closed forever. We would never all live in the same house again, not ever. As a family of seven children, so much of my identity wrapped itself in the presence of my siblings, in the strangeness of our large family compared to small families. When our oldest brother left, it was the beginning of the end. We were fracturing, taking paths seven directions away from each other, and my ten year old heart knew it and hated it.

I’ve hated leaving ever since. Mine and anyone else’s.

Clara, my oldest child, will be five at the end of this summer, old enough for kindergarten. This feels like a blow. In all honesty, it’s a blow to my ego. For these past five years I’ve sort of marveled at my position in life, moving through the world with a certain amount of pride at the ducklings lined up behind me, my three small children all in a row. I’d state their ages like an apology, knowing the stranger in the store would do the math and be very impressed and very sorry for me, all at once. That felt good.

“Yes, yes, look at all these little ones I’m raising with such love!” I’d want to shout on the street. “Look at me, shaping their world with such intention!” It felt like a badge of honor. It felt like a statement. Even on the bad days, it felt like victory.

So, now what? Clara turns five and then Sammy turns four and then Audrey turns two and then suddenly they’re all going to Ohio for college and I’m crying myself to sleep in their beds?

As I prepare to leave the only home I’ve known as a married woman, or as a mother, I find myself counting steps between rooms, stretching my arms between walls, pressing kinetic memories into my hands and feet. I want to remember the weight of my babies in my belly in this hallway. I want to remember the smell of their hair while they slept in this room. I want to remember everything because for some reason, I can’t see past these days. Some people can’t wait until their kids are older and more independent; they can’t wait to have a bigger house and move on in life, stop changing diapers and paying baby-sitters. Not me. I know that leaving this little house in Nampa means a part of my story is over.  A certain melancholy settles on me when I see my kids exerting independence, taking steps away from me and smiling as they go. I’m glad to see them grow; I’m excited to have parts of myself back that I haven’t seen in years; to think and to write and to dream without them attached to me; but it’s a bitter kind of sweet. A wistful kind of glad.

I pack up this house and I cry. I’m turning a page in our story, a page that changed me, one that holds the early arc of our marriage and the unfolding plot of motherhood, and that’s a heavy thought to carry around as I put pictures in boxes and unplug lamps. I don’t want to stay the same… but can’t we just stay for a little while longer?

A house is just a house and a town is just a town, until it’s not. At some point, it becomes a symbol. Nampa will forever be the place I saw God again. It holds my church, where I found peace after years of darkness, it holds the friends who held me up along the way, and it keeps the home where I really, finally, grew up.

The nursery where I rocked each newborn to sleep.
The tiny hallway I paced on endless nights of early contractions.
The kitchen sink where I gave three babies their first bath, one year after another.
A patch of front yard where we spent our afternoons learning how to be neighbors.
A front porch for sunset drinks and cracking pistachios, where Sam and I laughed at each other’s jokes and talked about our future.
The kitchen where I learned to use knives, to follow recipes, how to slice raw chicken.
The front door where my college diploma arrived on the same day as my infant son’s birth certificate.
The living room where I learned how to write.
The floors where my children crawled, toddled, and finally walked.
The walls that heard Sam and I learn how to fight, on painful days and through hard years.
The corner by the fireplace where we had our first ten Christmases.
The quiet bedroom where I taught my children how to pray. 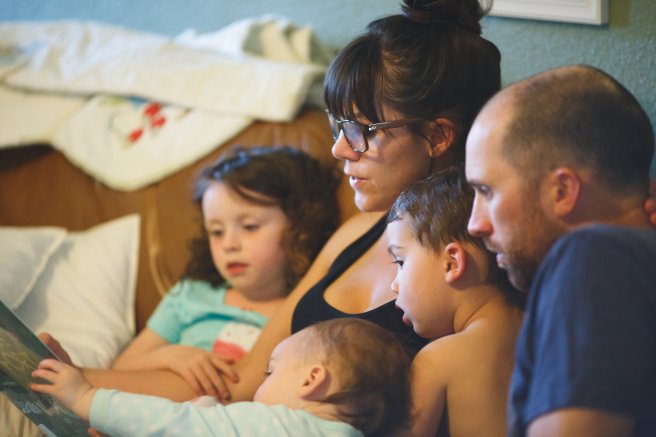 I never meant to stay  in this house or this town for this long. But I wouldn’t give back one minute of it, not one second.

This little house made us so happy for so long, and I’m afraid to leave because what if we’re never this happy again?

It’s nonsense. I know. People move. They survive. But me and Sam? We’re stay-ers. We land and we stay. We don’t move houses, we don’t move churches, we’ve both had our same friends for 20, 30 years- we stay. Leaving is uprooting, which requires replanting, and I’m nervous. Not just to start over in a new home, but to leave behind everything that this home represents. My identity is moving with my address. The kids are getting older. The house is getting bigger. The world is getting harder to keep out. The warmth and safety of our tiny life is slipping through my hands with every box I tape shut.

The future is too big to try and carry around while I pack my past, so I won’t. I’ll let myself be here for now. I won’t shame myself for being sad that someday soon my babies will be big kids who don’t remember the yellow walls of the nursery where we sang them to sleep.

I know we’ll have great joy in the coming years in a new town in a new house where my kids are big. We can’t possibly know the joy that waits, or the sorrows, or all the normal days in between.

But for now, in this nearly empty house? I already miss my ducklings, and I miss the place they called home.

All of these pictures were taken by Audrey Choate of Raft Media, for an At Home session that turned out to be one of the greatest gifts of our life.  If you spend your money on anything this year, make it one of these sessions. Put all the beautiful, honest pictures in a book, and give a book to each of your children as the most valuable, lasting gift  I can imagine; a glimpse of a regular day of their childhood with you.